Comedians, Lauriane and Yvonnick played under the direction of numerous directors (Pierre Jolivet, Cyprien Vial, Tonie Marshall, Philippe Le Guay, Abdellatif Kechiche, Isabelle Brocard, Mads Mathiesen …). In 2011, the desire to be at the foundation of projects pushes them to form the Happy Collective, which brings together writers, directors, and actors. They co- write and co-direct three short films that are selected and awarded at many festivals (Alpe d’Huez, Raindance, Meudon …), and broadcasted on TV in France and abroad. “Pile Poil” is their first short film producted by Qui Vive! Lauriane has a degree in screenwriting from La Fémis, and Yvonnick has a screenwriting training at the CEEA. They are currently writing two feature film projects. 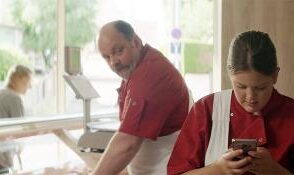