Fabrice Luang-Vija was born in Lyon in 1967. After studying literature and communication, he worked in the production of order films for companies (more than 300 videos produced to date). In 2002, he directed his first animated short, Square Couine, a mix of naivety and cruelty. Then, between 2003 and 2010, his film Fables en délire combines, in crazy adventures intended for the young public, farm animals, forest and jungle. Fabrice Luang-Vija lives in Valencia where he works both on his activity of commissioning films and the creation of animated short films. 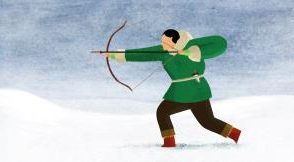